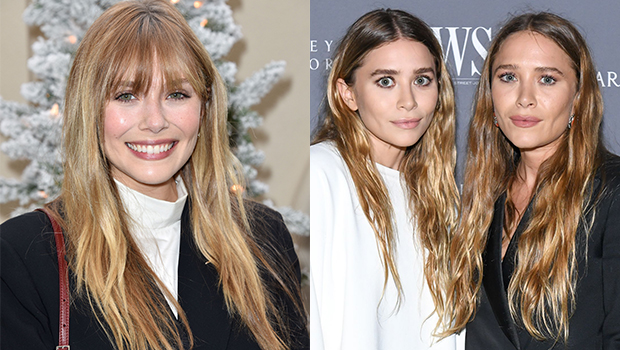 Are the Olsen sisters really a set of triplets? In these new pics Mary-Kate and Ashley’s sister Elizabeth looks almost exactly like the twins.

Yes, we know that Elizabeth Olsen, 29, is the younger sister of 32-year-old twins Mary-Kate and Ashley. But – even though the three women are related – you can usually tell Elizabeth apart from her older siblings. Not anymore it seems! The Avengers actress has gone from brunette to blonde, and with her bangs growing out way past her eyebrows she looks like almost exactly like, well, her sisters!

This is a big deal because many movie fans apparently didn’t even know that Elizabeth is the former Full House stars’ baby sister. Yes, really. Over on Twitter one fan tweeted on Dec. 2, “I just *now* realized Elizabeth Olsen is the sister of Mary-Kate and Ashley. The evidence was there all along.” On the same day, another person wrote, “How did I NOT know that Elizabeth Olsen from The Avengers is Mary-Kate and Ashley Olsen’s sister.” Although this fan did concede, “They look exactly alike ffs.”

Another person hilariously tweeted, using a cute old school meme of one of the twins from their Full House days, “That moment when you suddenly realize something that is so obvious. Example, I just found out Elizabeth Olsen (Wanda Maximoff/Scarlet Witch) is the younger sister of Mary-Kate Olsen & Ashley Olsen.”

Now that Elizabeth has changed her hairstyle and color it seems even more obvious that she’s the Olsen twins’ sister. So there really is no excuse not to know. Or, one fan came up with an interesting conspiracy theory that we can totally subscribe to as well.