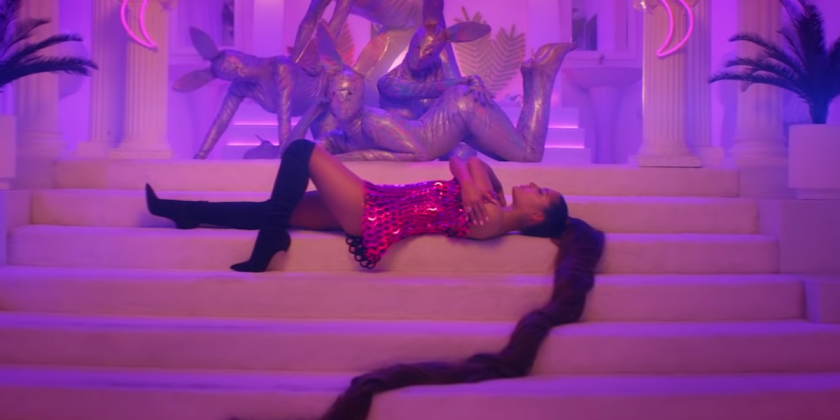 If you thought Ariana Grande’s "Thank U, Next" video was the greatest creation the singer has made, just wait until you see her new video. Not only is it coated in pink everything and catchy AF, but Ariana Grande’s ponytail in the "7 Rings" music video may just be longer than the checks she’s writing.

If you’re not a Grande fans, you may not have heard that hot off the heels of her mega-successful release of "Thank U, Next," she’s got a brand new single and music video that has the internet going well. The song, entitled "7 Rings," is basically a modern, Grande take on The Sound of Music‘s "Favorite Things" mixed with a friendship anthem. If you are a fan of the singer, then you probably already know that the choice makes total sense given the star’s love of musicals.

Like "Thank U, Next," Grande had some major moments in her latest music video. From references to wearing a ring without being married simply because she can to a moment where her iconic bunny ears seem to make an appearance, the video is packed full of images that fans may recognize. One of the biggest moments, though, revolves around her ponytail being well, big. Like, actually huge. 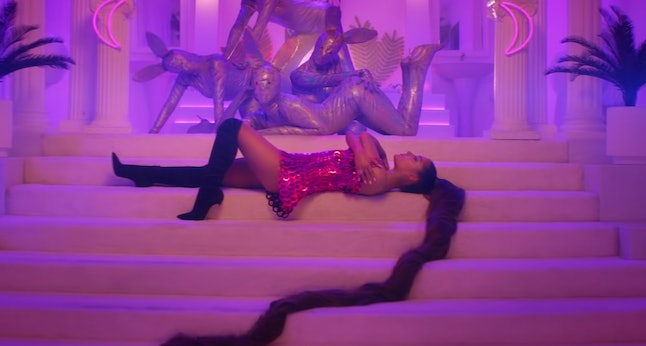 In the song, Grande’s chorus says, "You like my hair?/Gee thanks, just bought it," clearly referencing her iconic pony tail, but she doesn’t just have lyrics to remind people that her hair is part of her signature look. In the video, Grande obviously sports her typical high ponytail (completely with hair flips and all), but it’s a scene where she’s laid out on a set of stairs and looking like a glamorous Rapunzel that’s so major.

In the video, the scene cuts to Grande on the stairs and then begins to slowly pan out to show the full length of her ponytail. While the actually length hasn’t been revealed by hairstylist Josh Liu who Grande tagged on Instagram, the creation of that ponytail is an impressive feat.

The entire montage of Grande with her ultra-long Rapunzel ponytail low key appears to be a message to those who criticize the look. The fact that people hate on Grande’s signature hair is no secret. In fact, a few months ago, an internet troll tried to come for Grande about that signature style and was promptly shut down by the singer herself.

In a comment on a photo of Grande on Instagram, the troll said that she was sick of the "7 Rings" singer’s ponytail. Grande had one reply, "I’m not."

While some people may be exhausted of Grande’s look, her fans are still all about it. Her ponytail in the "7 Rings" video is making waves on Twitter.

Sorry to those who still love to hate on Grande’s ponytail. "7 Rings" is a new anthem and part of it seems to be saying that her signature look is just going to become more and more iconic in 2019.