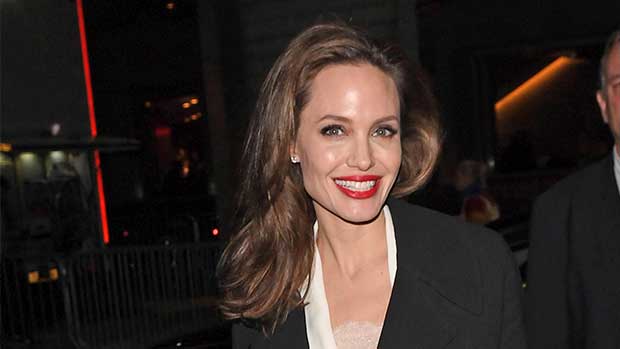 All glammed up! Angelina Jolie looked stunning while she attended a film festival in London on Nov. 23, just one day after Thanksgiving. See her gorgeous look here.

Angelina Jolie jetted to London after Thanksgiving for a special occasion: the Fighting Stigma Through Film festival, which took place on Nov. 23. The actress is co-founder of the group, Preventing Sexual Violence in Conflict initiative, that hosted the event, and she looked absolutely incredible as she arrived in style. Angie rocked a gorgeous white dress, which she paired with a long black coat, for the event. She also sported much more makeup than we’re used to seeing her wear, with smokey eyeshadow and a bright red lipstick. Gorgeous!

Despite currently being in the midst of a custody battle with her ex, Brad Pitt, Angelina looked carefree and was all smiles at the festival. It’s unclear when she landed in London, or how she spent Thanksgiving one day earlier. Ahead of the holiday, Brad was also overseas — he attended a gala in China on Nov. 20. As HollywoodLife EXCLUSIVELY reported, the holidays aren’t the easiest time for the Jolie-Pitt family, as the exes are still fighting over how to split the six kids’ time between them.

A judge has ordered that Brad and Angelina make their decision regarding custody by Dec. 4. If they are not able to do so, the case will go to trial, and it will be up to a judge to decide the arrangements. Brad and Angelina split back in Sept. 2016, so it’s been quite a bit of time that they haven’t had a formal agreement set in place.

After the split, Brad agreed to give Angelina primary physical custody of the kids. However, this summer, a new temporary custody order was set in place, which allowed Brad more time with the kids. A judge ruled that it was “harmful” to the kids not to have significant time spent with their father. After the order was lifted at the end of summer, Brad and Angelina were still able to agree on an arrangement that allowed him more time with the children. However, there is still no permanent, legal plan set in place — and if they don’t make one soon, this might be one LONG, drawn out trial.